After receiving some additional material, in particular a final version of Lisa Ehlchild’s painting, I have revised the video version of my presentation about Hugin that was broadcast on KUAR-FM on the locally produced program Tales From the South, which I helped produce during that time & throughout the first two years. I rearranged the elements of the video to better follow the text, and added some additional elements to augment the presentation.

Again, here is the transcribed text of the program:

Tales From the South

I first met Hugin in June 1980. I had moved to the Boston suburb known as Dorchester a few months before from Wakefield, a suburb north of Boston where I had lived for three years, since leaving my home and family on the shore of New Jersey. I had moved north in pursuit of a woman and a job. Only the latter had lasted more than a week beyond the move. In retrospect, it probably was just as well–but that’s another story.

On that June morning I received a phone call from my former neighbors in Wakefield. They told me that a friend of theirs had rescued a baby crow from certain death on their woodpile at the claws of one of their cats. They knew that I had reared fledgeling birds many times before, and thought I might like to do so again. I joyfully agreed.

Hugin was a partially-fledged crow who evidently had been too ready to take her first flight, or perhaps had been pushed over the edge by a pushy nestmate. When I got her, she was hungry and nervous. I already had picked up a can of dog food, which is a good basic food for birds who aren’t seed eaters, and some mealworms, beetle grubs that are exciting fare for many kinds of birds, along with some long tweezers that would substitute well for a parent’s beak. I added to these first food supplies by catching earthworms that were hidden under rocks and leaves.

With very little prodding, Hugin’s hunger overcame her shyness, and she eagerly took the food that I offered her. In short order she was able to feed herself. Her feathers finished growing in, and soon she was able to fly. I never clipped her wing feathers, as is often done with birds. She showed no desire to leave me, and aside from a couple of special circumstances, never flew far away. She was free in my apartment whenever I was home. Her cage was open so she could return for food or water, but there were perches for her in the other rooms, and she generally stayed wherever I was.

Anyone who has had any experience with crows will know that they are among the smartest birds, by some measures having intelligence similar to primates. Reverend Henry Ward Beecher wrote that “if men had wings and bore black feathers, few of them would be clever enough to be crows.”

I gave my new friend the name Hugin, after one of the pair of ravens who accompanied the Norse god Odin. They were his messengers between our world and the home of the gods. The name Hugin means ‘mind’ or ‘wisdom’ in Old Norse. Seldom was an animal given a better name. This clever bird, like all intelligent creatures, loved to play, and delighted in making up new games. The old wives’ tale that crows like to hide things is very true. But to make the game more enjoyable, she added theft to the process. If I were cooking in the kitchen and were to set down a spoon for example while doing something else, I would turn back to find that spoon missing, and Hugin busy in another room. I would search for known caches, usually unsuccessfully, and eventually would give up and return to the kitchen. Within a few minutes of my resuming work with a different implement she would swagger into the kitchen with the missing spoon in her beak, waving it from side to side, clearly taunting me for my inability to detect her best hiding places.

Another frequent game would involve an object that I had set on a counter or table. She would slowly, deliberately, push the item to the edge, move to the best vantage point, give a final prod to the object and then lean over to watch it crash to the floor.

Before long this game became boring, but her creativity soon led to new fun ideas. A favorite treat food was the unshelled peanut, which she enjoyed opening. But once she took a peanut and a paper cup, and discovered centrifugal force. She dropped the peanut into the cup, then shook the cup repeatedly until the peanut flew out of it. With a bit of practice she could fling a peanut across a room, then bring it back, drop it back in the cup, and repeat the process, again and again.

All birds love to bathe, and Hugin was no exception, but she was far too big for the sort of bird bath made for normal pet birds, so I got a plastic pan of the sort made for kitty litter, and would put it on the kitchen floor, partly full of water, for her enjoyment. One day, I was curious to see her fly to the kitchen sink, remove the plastic silverware cup from the dish rack, and take it with her to her bath. She held the cup over the bath and lowered it, watching the water bubble into it through the drainage holes. Then she lifted it out of the water and held it over the side, watching the water drain onto the floor. This mischief, like so many of her games, became a regular part of her repertoire.

Hugin was a loving and affectionate bird, who thrived on attention. She loved having her feathers preened, and preened my hair and beard in return. She was just as friendly with others, even strangers, as long as they showed no fear. But if someone appeared nervous, her mischievous nature took over, and she would tease the poor person. Favorite methods included pecking on the toes of their shoes, or flying up and over the head of the individual, so close that her toes would flick their forehead. Evidently she had disdain for fearful people, and didn’t hesitate to show it. However, with children she always was gentle and caring.

Crows are known as mimics, and sometimes become good talkers. Hugin acquired a few words, her best one being ‘hello,’ which she said in appropriate situations often enough to suggest that she had at least a general of its meaning.

There was no doubt that I was her closest friend, and she held me to a high standard. In addition to her games of hiding, she had other ways to get my attention if it wandered. When I spent too much on the phone, she sometimes would unplug the phone cord from the wall, effectively ending the distraction. Occasionally she tried out the phone herself. She would push the handset off the cradle, and then pound her beak on the keypad. Amazingly, at least one time she succeeded in dialing a working number. By the time I got there, I could hear someone on the other end saying “Hello? Hello?” to which Hugin of course responded with a cheery “Hello!” of her own.

The most memorable instance involving Hugin at home were the two encounters with a little brown bat who managed to find entry into my apartment in the middle of the night. I woke to a commotion in the kitchen, with Hugin cawing loudly and flying in tight circles around the room engaged in an aerial dogfight with the bat. After putting her into her cage and closing the door, I managed to catch the bat in a net. I felt sorry for the poor beast, and fed it some meal worms before releasing it. Perhaps that was why a few days later the same event occurred again. Perhaps the bat thought the tasty meal worms were worth being chased by a crow around an unfamiliar kitchen.

Hugin lived far too short a life, just over three years, not the two to three decades that she might have lived. Death came suddenly one morning without warning, but apparently peacefully. Rather than the contorted posture of most dead birds, with head and neck pulled sharply back, she looked as if she had settled on the floor of her cage and quietly gone to sleep. For this I was grateful. I gently held her still warm body, the pain of her sudden departure leaving me empty and bereft, yet consoled by how much my life had been enriched by her presence. I vowed to give her a proper Viking funeral, befitting a messenger from the gods. 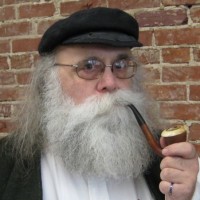